More reaction on United win; Old Trafford What was all the fuss about? 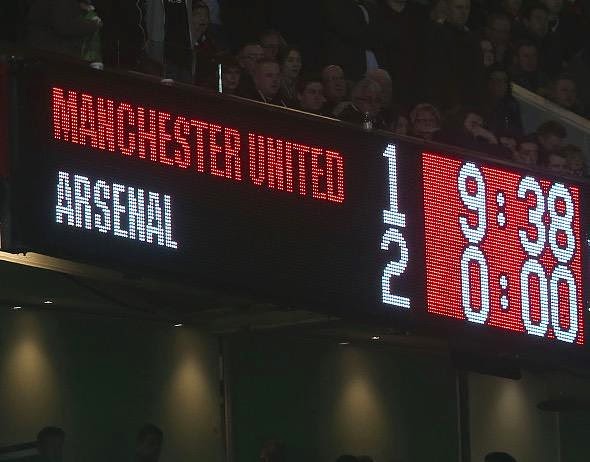 Of all the pictures banded around after last night, I think this is my favourite; it doesn't come any more conclusive than that.

Never have I been so happy to be wrong, as I was saying on the blog  prior to game I wasn't feeling too confident about the match and looking at the stats only made that apprehension worse, overall though we deserved the win and I 'd go as far as to say that we were comfortable in the second half; what did Szczesny have to do? Beside's kicking out poorly throughout and taking on Rooney in a way that only goal keeper's can when they do that stupid drag back thing inside the box (Why do they do that?), and generally looking nervous throughout, I can't actually remember him having to make a save of note in the second half. Right first of all let's get down to the reaction from the Arsenal camp after a stunning victory at Old Trafford which leaves the Gunners in with a chance of retaining the F.a cup for the first time since 2002 and 2003.

In an interview after the match Wenger said that;


“I’m very happy because it was an important game for us,” Wenger told Arsenal Player. “To go to an opponent like Manchester United in the FA Cup, in a direct knockout, you have to win.“Mentally we were prepared and started on the front foot without any apprehension. We put them under pressure from the start and overall, we deserved to win the game. “Winning here shows that we are improving and progressing. To win a big game helps to increase the belief of the team.”“Nacho’s had a great season until now and I’m very happy that he scored. “He provoked the penalty at Manchester City as well and today he scored. He had a great game.“We play so many games that you have to rotate and I felt that Danny had a great game. Not only a great individual game, but showed great teamwork. He worked extremely hard and that’s good.“Most of the time it’s mentally not easy to deal with returning to a former club and he dealt with it well. He was focused on his game and that’s it.”

Welbeck also gave an interview after the match;


"It's good for the team that we're through to the next round, in the semifinals at Wembley," Welbeck told the club's official website."To get the goal was good for me but it was all about the team performance tonight."It was a great reception. It wasme but I tried to be respectful." "It was about being professional, keeping my focus and motivation. I kept plugging away and then got on the end of Antonio Valencia's backpass, beat David de Gea and got the winning goal."I'm just really pleased we're through to the next round."I stayed professional and I was just doing my job. To be able to get back on the scoresheet and get through to the next round is the most important thing rather than scoring against United."

Right that's enough of the post match reaction stuff so; you can get all the rest on the club's official site, as I have linked above. I picked out a few interesting stats in another great 'By the numbers post on the Arseblog site', I picked out a few key stats I wanted to mention. Firstly, the obvious Welbeck to Falcao comparison is in order. Welbeck has now scored 8 goals this season compared to Falcao's poor return of 4. If that, according to Louis Van Gaal makes Welbeck a bench player, then what does that make Falcao? I'm sure I wasn't the only calling on the referee to book and send off Fellaini during the game due to his constant fouling, the stats only back me up; of Man United's 22 fouls committed in the game, 8 were committed by Fellaini alone; and even more startling then him staying on the pith at the end of the match was that the referee let Fellaini off with 7 fouls before booking him.


The stats also suggest that United dominated the passing during the game with making 123 more passes than Arsenal, (476-353 overall), however, as is pointed out on the Arseblog post, United only attempted 12 more passes in the Arsenal final third compared to the 159 times Arsenal did in theirs (159-147 overall).This amounted to United only attempting 33% of their passing in the Arsenal final third,compared to Arsenal's attempted figure of 42% in the United third. With the Arsenal players running more with the ball and playing at a faster pace it meant that United had to make a lot more tackles (thus, the overall high foul count on their behalf) than Arsenal in a very high amount of 51 attempted tackles compared to the Arsenal equivalent of 41. Arsenal also out scored United on the amount of successful tackles; with that figure standing at 30 to United's 28. Finally when it comes to aerial duels, it would be no surprise to learn that Fellaini won a successful 5, but for all United's long ball play the player who won the most aerial duels was Laurent Koscielny with a very impressive tally at 7. Koscielny also won a huge 33% of Arsenal’s overall aerial duels. Again, have a look here at the full post on the Arseblog site.

The stats  really stand to back up the assertion that Arsenal were the better team, created the better opportunities, were better in passing, were quicker in their general play and even better in the aerial duels. Oh yeah they also scored one more than United also.

Right that's it for this post, don't forget to leave any comments on the above, keep an eye out for more and follow me on twitter here @ https://twitter.com/Cosmic__Kid .