Well we got there in the end; it may not have been the easiest way, but we are there and that is all that matters. I am not going to bore you all talking about the actual game at this stage as i'm sure you have all watched the match, if not live, then seen the highlights, so it would be pointless to do so. What am I going to type about? I have no idea, but let's see what comes out anyway.

First of all, I do have to mention the first goal as it was true class from our two most expensive signings. That is exactly what you pay 70 odd million for; to score the goal nobody else on the team would have scored. 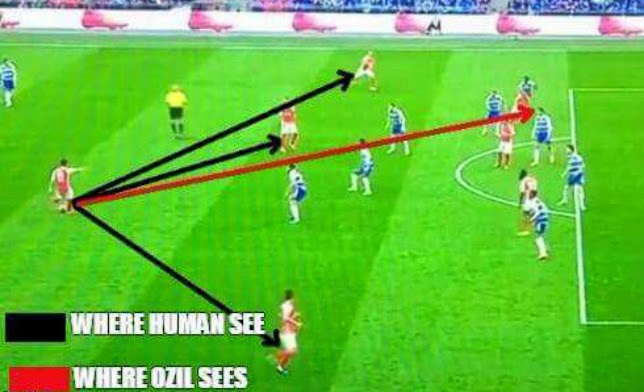 I love that picture; firstly because it highlights the complexity of the goal but secondly, and most of all, because this picture fills out space on this post so it looks like I have typed more than I have, thus giving me some kind of extra credit for typing longer, although not necessarily making interesting, valid points. Anyway, let's move on.

There were a couple of things that bothered me about the match. No not the Arsenal performance. I'll get to that. It was the reaction from so many people that Arsenal we're lucky to win. Lucky to win? That is absolute nonsense. Just because we did not win the game 4-1 does not make it fortuitous. Just because we won in extra time through a goal keeping mistake does not make it lucky. This was a cup semi final, there are no easy semi finals.

This was the game of Reading's lives. the last time they were in an F.a cup semi final was 1927, why on earth would anyone think that this would be an easy victory for Arsenal? Yeah sure, we are the form team in the Premier League and Reading are struggling near the bottom of a division lower; but this is a one off match, anything can happen.

I really dislike this whole pundits supporting the underdog nonsense, especially when it detracts from them giving a fair, balanced view of the game. They are paid to give their opinion on matches; but they have to be objective about it, or at least pretend to be. Arsenal had multiple opportunities in the game; the Gabriel header, Ramsey and Giroud hitting the post, the Mertesacker header; pretend for a moment that we scored two of those chances, the whole narrative would be different. It would be something like, 'Arsenal stroll to comfortable victory', 'In the end quality came through' and all that crap. Even if the circumstances from the game were the exact same apart form scoring those 2 other goals; the narrative and how people talk about the match would have been completely different. It also seems that, if it were Chelsea, they would have received more praise for winning like that, rather than a pulsating 5-1 victory, context and relativity, it seems, mean everything.

This was not Arsenal's best performance of the season, or any season for that matter, but they were comfortably the better team in the game and the complete, over the top reaction (similar to what Giroud received after the Monaco match), is both ridiculous and embarrassing in equal measure.

Mesut Ozil alone created 9 chances in this match, which is the most in any F.a cup game this season after beating his own previously set record of 8 against Middlesbrough in the fifth round. Yet, I hardly read any mention of it at all in the mainstream media, in fact according to match reports he was largely anonymous, besides setting up Sanchez for the first goal, he did nothing. They say that it was his one moment of brilliance; but in reality the brilliance of Ozil is perhaps best summed up by his constant under the radar creating of chances, not the one 'obvious' bit of class. The fact that Ozil created 9 chances in this match, without any real mention or praise, is as much an indictment of his quality, than naming him man of the match for doing that.

This is the norm for Ozil; after-all, how can you constantly praise someone for working at such a high level, if they are constantly at that high level? Anyway, best leave that there, we have been over this already, haven't we Paul Scholes?

As I said in the preview, I would not have started Szczesny, who once again nearly cost us dearly. It started with his now trademark poor distribution, immediately putting the team under more pressure which lead straight to the Reading goal. I have to say though, that he alone is not the only one culpable as it really was poor defending all round. First of all that cross should never have come in, and secondly, Gibbs should have dealt with the situation a lot better. However Szczesny should have easily made the save. Perhaps he is suffering from the fact that he is a goalkeeper and every big mistake will likely lead to a goal, as we saw again with Federici; after all, most goals are usually the product of poor defending but not poor goalkeeping, thus when there is a goalkeeping error it is so obvious that there is no escaping criticism. I really hope Wenger plays Ospina in the final, but I don't think he will.

None of what I have typed really matters as we are in the cup final for the second year running, and if we retain the cup, not only will we become the singular most successful team in the competition's history, Wenger will also be the most successful manager with 6 wins in modern F.a cup history,  eclipsing Ferguson's 5 at United. For the record George Ramsey managed the feat six times, with our cup final opponents, Aston Villa between 1884 and 1926. Winning the cup again would be quite the achievement for a so called 'specialist in failure'.

Right that's enough rambling for one night; Let me know what you think in the comments.