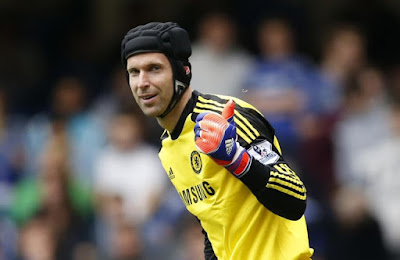 Well here we are in the thick of silly season and yet the only thing silly seems to be the impending arrival of Petr Cech from title rivals Chelsea, who just happen to be managed by Jose Mourinho. I wrote last week on the possibility of this transfer actually happening and at the time I really didn't see this as a possibility, looking at all the factors, and especially seen as we have all been fooled into thinking transfers were done before, Higuain and Remy for example. However, my opinion has changed over the course of the last week and it's looking quite likely that this may happen.

There have been a couple of 'signs' the last couple of days that have sent people on twitter eager for any sort of official announcement from Arsenal. The first being Stuart MacFarlane, Arsenal's official photographer following Cech on Instagram which was taken as a sure fire sign of the Czech international's arrival. I can obviously see how people have jumped to that conclusion but I doubt that the club's photographer has any special insight on transfer dealings. He might hear some chatter around the club, but I imagine that would be about it. He has since tried to clear up the matter via twitter:


"Funny people think I know what's going on with transfers, just a photographer. I'm an Arsenal fan like you and follow all the media rubbish".

Anyway let's just hope he is right. There was also a picture put up on Tomas Rosicky's Instagram account saying 'Welcome to #Arsenal Petr Cech', and seeing as both players are international teammates this sent everyone into a frenzy. However, it has since been confirmed that it was a fake account and the real Tomas Rosicky has not put anything up on the subject at all....yet.

Even with all this nonsense floating around I think the signs look good in general, there's no smoke without fire after all. However, for me at least, today was the biggest sign, as Sky Sports have claimed that there has been progress made towards a transfer.

Up until now the big, and generally more reliable media sites have been realtively quiet on this topic, so this is encouraging. Sky have claimed that while the fee is yet to be agreed, personal terms, in principle have been agreed between the player and the club. Here is what they said;


"Sky sources report Cech, 33, has agreed personal terms in principle on a switch to the Emirates Stadium but we understand the two clubs are still not close to agreeing a fee and negotiations will continue this week"

"The transfer fee is unknown but it will be a cash only deal, with Chelsea's request to receive a  home-grown player as part of the proposed transfer no longer being considered"


So there we have it, it's also great to see that there will be no player exchanges as part of the deal, because I really wouldn't have wanted to lose Chamberlain, the player supposedly wanted by Chelsea. All in all it looks good, here's an article on the Metro comparing Cech to Ospina and Szczesny, the new arrival looking a definite upgrade. It would be great to see this deal go through as I don't think we have had a steady goalkeeper since mad Jens left, this signing could be the foundation of a strong title challenge.

Anyway I will leave the rest of the transfer speculation to you lot, let me know your thoughts on the situation in the comments.

Have a good one.