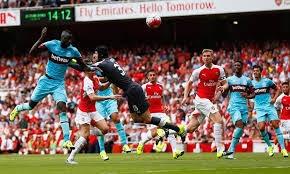 I always find it difficult writing about Arsenal after such a disappointment, but to be honest since I started this blog, back in March, I haven't had much to be disappointed with. We were basically out of Europe already following the Monaco incident, and although we lost at home to Swansea we had our Champions League spot all but guaranteed and title aspirations was a non-starter right from the beginning. 'A non-starter right from the beginning', that sounds like a strange sentence, doesn't it? Anyway the point I am trying to make here is that while it was a bitterly disappointing performance and result, we need to have a bit of perspective. Losing is part of football, sure, we should expect a  far better performance, but football is completely unpredictable and as we have seen countless times in the Premier League; if a team is off by just 5% you get punished. That is unless you are Chelsea of course, who although, were played off the park by Swansea, and went down to 10 men, they still manages to secure a draw. That is the difference between both clubs presently; their second goal was a complete fluke, which went in from a massive deflection, whereas Ramsey had an effort that deflected onto the cross bar in the first half; what if the goals were reversed? Arsenal went one up and Chelsea stayed level ? We don't know what would happen, the margins are so fine in football; it is one big grey area (or green, I suppose..) and not the black and white, obvious, game most people, perhaps, wish it was.

I heard a lot of people talk about the lineup and that the manager got it wrong. I don't agree with that at all. I doubt there were many people who would have made any changes to the lineup. If Walcott had started the same people complaining about Giroud would almost certainly do likewise with him. It's always easy to say these things in hindsight. One thing I would agree on, however, is how narrow Arsenal played through the whole match. It is hard to tell whether the lethargy of our performance was a symptom of our lack of width or our lack of width was due to our sluggishness, either way they were both related. This isn't a new phenomenon either, when you look at our recent home record, and the performances in each match, it is quite alarming, we have failed to score in four of our last five home league games;


What all those games had in common, with the exception of the West Brom match, which was the last game of the season and they had nothing to play for, was that they all set up deep defensively and we created few chances, we played very narrow and never looked too threatening. It is concerning and you start to feel as though other teams have worked out a system for playing us; when we play either Ramsey or Cazorla out wide we find it incredibly difficult to break teams down who are intent on sitting back. Perhaps Mourinho never took his bus home with him... I really hope Wenger looks at that and tries to rectify the problem, another striker, a world class striker would of course help, but it is the style of play that needs changing first. We have to play faster and employ more width. Here is a look at a chart the BBC produced of Arsenal's average positions in the West Ham game: It is far too congested in the centre.. 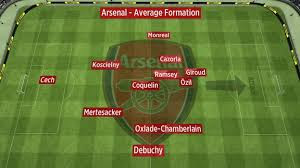 Another aspect of our game that concerned me is linked to the great advantage of the system we play; the inter changing between the players. What I mean by that is the fact that the constant changing between players led to a lack of cohesion and prevented any sort of direction for the team to play. What highlighted this most of all was the amount of times we saw Giroud peel out wide; the problem with that is we have no other aerial threat, but even more worrying was that we had no midfield runners at all. There was one such occasion where Giroud managed to play in a delicious looking low cross, which would have fell perfectly to Ozil had he decided to make a run into the box earlier. I like our interchanging play, but it has to be done right or it just looks like a mess. Finally on the match itself, I was also frustrated with Cazorla being pushed out wide by the manager again; he was fantastic in the middle last season, why change that? I genuinely believe he brings us up another gear in the middle.

We all know the goals were sloppy and Cech was at fault for both, but he wasn't the only one at fault, as the manager said, it was a collective failure, so I don't really see the point in discussing it any further here; it has been done to death already. What I will say is that he is a world class keeper and will save us many points throughout the season; It was just one of those days at Arsenal.

I want to make a point about the reaction of a lot of Arsenal fans. We all have the right to react whatever way we do, but there was a clear overreaction to this match which I find ridiculous to be honest. We have played one match; we are only 3 points off the league leaders with 37 games to play and 111 points to play for. We also need to factor in that players recover different from pre- season, some are ready to go from the start and some take a few games to get back to full match fitness. West Ham had also played in a few competitive matches, in regards Europa league qualification, so they were ahead of us in terms of preparation as well, it must be pointed out. If this performance happened later on in the season, however, it would be deeply troubling, but i'm not too concerned, and see us as still in with a great shout at lifting the title come May.

I also found it interesting when I looked at our opening day results, and what I found was, coincidentally or not, since we began our long pre-season tours our results on the opening day have been dramatically worse. We cannot, of course, put that down solely to these tours as there could be numerous reasons, such as lack of transfer signings, poor preparation etc.What is clear however is that we have only won our opening match once after returning from our adventures in the Far East. Here are a look at the results;

Therefore, when you also factor in the long held idea that we do not perform well under increased pressure and expectation (think Monaco!!) You could say that the result Sunday was somewhat predictable...

Anyway I'll leave it there for today.
Have a good one,