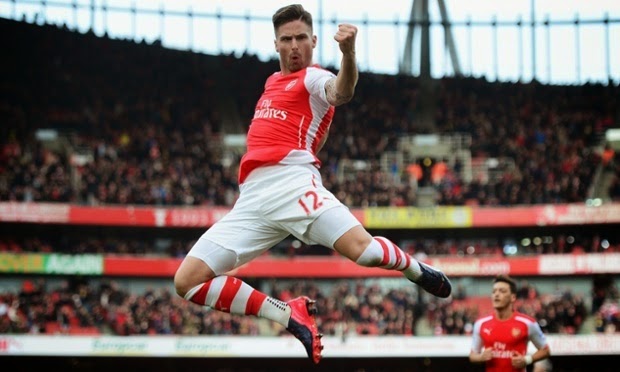 Good morning to all the Gooners out there after another comprehensive victory, in another London derby. It got better later on as City managed to put in another woeful performance and lost away to Burnley, which leaves us only a point behind them in second place. As I said in the preview we were looking for our 5th consecutive Premier League win and to get it in such a comfortable fashion is pleasing.

Arsenal were on top for much of the first half but couldn't break through the stubborn West Ham resistance until the final seconds of the first half in which Giroud,, after some great one touch play around the box, took the ball off Ramsey and absolutely thumped a shot off the post and into the net. It was a great goal and that was also Giroud's 6th goal in his last 8 Premier League games (he also has 3 assists). Not bad for a player who got a ridiculous amount of criticism after the Monaco game. He always seems to respond well to criticism, meaning Arsene's 'mental strength' phrase would be well placed here.

In truth we should have went into the break with a bigger lead after some great goalkeeping by Adrian kept the score line reasonable, most notably from Ramsey and Walcott. When Theo was played in i'm sure you, like me, were expecting the net to bulge but he just kept going with the ball, like he froze and was afraid of  shooting (not the only time an Arsenal player would suffer from that not shooting when there is a chance kind of nonsense). I know it seems odd that he would ever hold back from shooting at any time in a game, but to me he still didn't look 100%, so maybe after all there's nothing else behind him not playing, other than trying to nurse him back properly from injury.

West Ham came out after the break and were on top for the first 15 minutes, searching for an equalizer, but for all their huffing and puffing Ospina was never really troubled, besides the usual run of the mill saves. It always felt comfortable for Arsenal. Even in the first half when they caught us on the break more often (from sitting deeper, and us pushing forwardlooking for the opener), I thought Koscielny dealt with everything they had; he had an excellent game and looks back to his best. So too, did Tony Cottee, who was commentating, as he could do no wrong in his eyes. He gave Per a grueling any time he did anything; 'There he goes again Mertesacker, leaving people run in behind him, depending on his buddy Koscielny to clean up the mess'.

Ramsey scored the second goal, his first since that volley (worth another look) against Galatasaray I believe, which is partly down to injury but also form. He had a really good game Ramsey, was involved in everything and but in a shift defensively aswell. This was another excellent goal, with Giroud providing a perfect dummy for the Welsh man, and then bounced the ball back and forth again before Ramsey said he had enough and hit the ball into the rood of the net.

I think what really would have bugged me if I were a West Ham fan is the fact that Flamini scored with his first touch. I mean that's just insulting isn't it? This was a far more basic goal, with Ramsey playing in Cazorla who slid a delicious looking ball, low, across the box giving the French man no chance of missing.

According to The BBC, we had 68% possession and 19 shots, on target with 9 of them, compared to West Ham's 1 shot on target from 7. I think that says it all really and its good to see us win with the majority of possession and playing on the front foot after all the talk of only being able to win with less possession. Variety, my fellow Gooners, is what we have, not only in terms of playing style but also in terms of the attacking option we possess.

Here's what Arsene Wenger said after the game, as per Arsenal.com;

"We had a good focused performance,"We had some weaker moments but in the first half it was all us."At the start of the second half we had some problems but we kept a clean sheet and in the final 20 minutes it looked like we could score again, which we did.
"For 80 per cent of the game we were in control. Maybe for 10 or 15 minutes in the second half they put us under pressure but you expect that in a derby when a team is 1-0 down. "We had some problems coming out of the dressing room when our energy dropped a bit. We found the energy again after and that made the difference."

I tend to agree with everything Wenger says there and i'm sure most Arsenal fans would. So, all in all a nice win that set's us up lovely for the trip to Monaco.

Right that's that, I'll have the player ratings up soon. in the meantime follow me on twitter @ Cosmic__Kid.