Abou Diaby and the consequences of football thuggery..

The season has ended, the summer has started but Arsenal related news has yet to dry up. I have been surprised to find out that my 'news now' feed is loading up new articles every few minutes rather than every few hours, which is usually the case in the summer time, especially since it has been a week and a half since the cup final. All in all, besides the usual silly season transfer nonsense, there has been plenty of Arsenal related stuff since my previous post, last week, the big news coming in the form of Abou Diaby.


Diaby, who has (had?) been at Arsenal since January 2006, making him our longest serving player, alongside Theo Walcott, has been released by the club a number of reports have announced today.You can't help but feel sorry for Diaby, whose Arsenal career has been destroyed by injury after injury. What makes it worse in the eyes of most, if not all, is the fact that his injury problems seem go back to the end of his first campaign at the club, where we played at Sunderland, only a few weeks before the Champions League final, and he suffered a reckless tackle from Dan Smith. 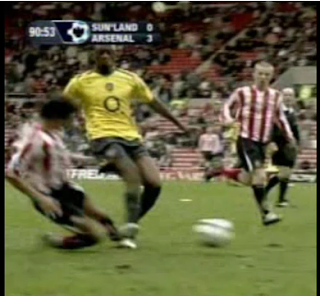 I know the photo isn't the best but there doesn't really seem to be one of a better quality around, I also wanted to put this one in because you can see the timing in the match. It is a very poor challenge and completely unnecessary at that point in a game, especially where you are 3 goals down. It is the 91st minute of the match and I know some people will use that to, in some way, justify the tackle as the player would have been disappointed and frustrated with not only how the game went but the season as a whole, as Sunderland were relegated, but to me that is absolute nonsense. You can't do these sort of things on a football pitch, part of the job is controlling your temperament and if you cannot do that then you shouldn't be on the pitch in the first place.

The simple fact is that these injuries are the symptom of poor managerial tactics and strategies.There has been a general consensus by most in football that the best way to beat Arsenal is to kick them off the pitch. There is no problem with passion or even controlled aggression during the match but too often teams go overboard and the Arsenal players are the ones that suffer. We can all call for more protection from referee's, but we don't want the English game to disintegrate down to the completely absurd strict level of officiating we see in European matches. The bottom line is that it is up to the managers to set the team out to stop the opponent from playing which doesn't resort to, what I call, at times, 'legal assault'. Maybe that's too strong a term, but you can't go around kicking some one on the street because you don't like them or they are better than you at something. So why can you on a football pitch?

What I don't understand is, when players are set up by a manager to physically stop a team playing football, why don't the players find that offensive? I mean it's basically saying, 'right your not good enough to beat them on your own terms and qualities, so just kick lumps out of them and we might get lucky'. There are ways to beat teams which don't take risks with leg breaks. Set the team up to be well organized, sit deep, work hard, press the opposition in key areas, don't give them space, when you get the ball use it carefully and break fast (not to be confused with 'breakfast'!), use set pieces to your advantage. I am not saying that every time Arsenal lose it's because they were kicked off the pitch, far from it, but it only takes a small minority of teams for these sorts of injuries to happen. You know, Something about one bad apple and all that.

I have come across some strange reasoning from people to justify some of the bad injuries we've suffered, like the point I made about losing your temper at the end of a match above. However, one of the most ridiculous, is where the problem is actually turned back on Arsenal and more specifically,the  the managers. The people who say this believe that these poor tackles are the consequences of him signing smaller, more diminutive players from abroad who cannot cope with the physicality of the English game. Do they believe that there should be some sort of cut off point for the size/ build of a player who can play in England? It's completely nonsensical, its like where people try to blame what women wear as the reasoning for rape. Pure madness.

It is part of the game and sport in general that players will suffer injuries, and there will always be bad tackles. There is nothing you can do about that, but there is a difference between a player getting his timing completely wrong and a player who quite obviously over aggressively challenges for a ball. We have even seen some players who purposely go out to hurt others. Think of Roy Keane on Alf Inge Haaland back in 2001. He says he never meant to purposely injure Haaland, I say he should have never played again. In the end Haaland never played again, no end of fines or temporary bans can make up for a career lost to complete thuggery. Here's a link to an article in which Haaland says that he still feels his knee twinge to this day; the tackle still haunts him. 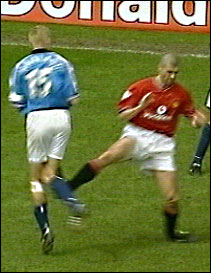 I really hope no one brings up the injury Keane suffered previously involving Haaland. There is no excuses for that sort of behaviour.

Perhaps some people may feel that I have been too strong on the issue here, but I doubt Abou Diaby, or even Arsenal fans will feel that way. Arsenal fans have had to suffer more than other clubs with this, think of Eduardo, Ramsey, Diaby obviously, but even this season that Arnautović push on Debuchy on the advertising boards basically ended his season. There was no charge or ban for that, however. My worst football memory came when Arsenal lost their unbeaten run at Old Trafford in October 2004. United had resorted to kicking Arsenal for the result, the Neville sisters had tag teamed on Reyes for the afternoon. He was never the same player again. Van Nistlerooy ran his studs down Ashley Cole's shin;  he was only punished after the match. There is nothing worse than seeing so called big teams resorting to this type of behaviour. More than anything big teams have a responsibility to play good football.

What really puzzles me is the fact that this sort of behaviour has not only been given the cold shoulder, but it is encouraged by the media at times. Remember Phil Neville saying he would have 'two footed' Rosicky for making a fool of him? I found that absolutely ridiculous at the time, even more so now. Physicality is a great strength (pun intended) of the English game, but the consequences of the over-physicality is too much to risk for a single match.

The fact of the matter is that the best Arsenal teams have always over come the aggression of other teams, and we are beginning to see this again with this squad, but to be quite short, the simple point I wanted to make in this post  is that they shouldn't have to. Yes, football is a contact sport, but I believe that it is first and foremost about skill and being proactive. It is why (since people always ask me) I dislike Mourinho's sides and his style, it is far too reactive and depending on other teams weaknesses rather than your own strengths, and by the same token so too is relying on your physicality as a means of bullying teams to get results.

Right I want to get back to Abou Diaby now. According to The Telegraph, he has suffered 40 injuries in 9 years at Arsenal, and shockingly only made 124 appearances as a result. It is a really disappointing end to a player who was always an exciting prospect but never quite got the chance to show it. It would be great for him to move on to another club and overcome his problems.

While i'm at it, It has been said that Diaby highlights a big flaw in Wenger's approach to management in that he stuck with him too long and was not ruthless in the sense that say, Mourinho or Ferguson would have been. That is a valid point, but I also think that this is a strength of his management style. He sticks by his players and gives them the opportunity to come back even strongrer, look at Aaron Ramsey for example. This aspect of Arsene is greatly under appreciated in my opinion.

Right I'll leave it there for today. Let me know what you think in the comments.

Don't worry Abou, we will always have Liverpool in 2012!