Arsenal Win At Spurs To Extinguish Our Fire Of Discontent.. 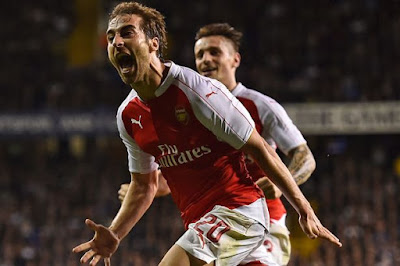 There is nothing like a victory at the old enemy to help close the wounds on what has been a truly testing week as an Arsenal supporter. Our Champions League campaign got off to a disastrous start with a flimsy attempt at bringing home the points from Zagreb, which was followed up by what you can only describe as a fuck up of massive proportions from Mike Dean at Stamford Bridge Saturday lunchtime. With Arsenal supporters these days there is always an underlying feeling of angst and tension and any dip in performance or results from the team gives oxygen to the fire of discontent among fans and you could already feel it bubbling up,which is why the game at the Lane took on extra significance and thankfully, for now at least, the fire of discontent has been extinguished.

Since I haven't posted in a while, I want to take us back to Saturday. It has been 5 days since we lost at Stamford Bridge and while yesterdays win certainly helps, there is still a lot of anger there. It almost reminds me of game number 50 at Old Trafford, in 2004. There is that same feeling of injustice, which is not exclusively limited to the Gabriel- Costa incident. It angers me when people say that Gabriel should not have reacted and thus he wouldn't have been sent off, what those same people fail to mention is the fact that had the referee done his job in the first place and dealt with Costa that wouldn't have happened, and we would have went into half time with a man advantage, not a man light.

Aside from that, the free kick that lead to Chelsea's first goal should not have been given in the first place and then to further rub salt in our wounds and send Cazorla off was a complete joke. It wasn't just one incident that angers Arsenal fans, but a culmination of poor judgement and negligence in the extreme from an experienced official that means you have to question his suitability for officiating at the top level. For the F.A to then go out and ban Costa for 3 games and at the same time rescind Gabriels sending off only serves to highlight this point. One thing I do not understand, however, is why is Gabriel still facing a charge for failing to leave the pitch? They have admitted he should not have been sent off, so why wouldn't he complain? What a massive cluster fuck on behalf of the F.A this whole thing is. Wenger had some interesting comments on the situation after the Spurs game;


“That just shows that they decided after the game what should have been decided during the game and they repair five per cent of the damage that has been done to us. Instead of us playing 11 against 10, we played 10 against 11".

However, Wenger did say that he would accept whatever decision the F.A make on Gabriels impending hearing;


“I said after the game he should not have responded at all and I maintain that. I told him that but when I saw it again he had not done a lot, but you want them to have a fair judgement and we will accept what they decide. That is part of it.
“They will judge that situation and it is right. You cannot consider the whole context of the game, you want them to judge and decide and we will accept the decision.”

Anyway onto the Spurs game itself and it was a strange match to watch, because in many ways the first half felt somewhat subdued, at least up until the first goal was scored anyway. There was a lot of worried fans when the team sheet was announced and I must admit I had my doubts too, solely for one reason; lack of pace. When I saw the lineup that is what struck me most of all, with Per and Chambers at the back and the old guard of Arteta and Flamini in midfield, not to mention Giroud up front, there was genuine cause for doubts.

They were to be proven wrong in the end however, as I thought the two centre backs played very well (Chambers own goal apart), which is is even more encouraging when you consider Mertesacker is returning from the worst chest infection of all time and Chambers has only featured a couple of times this season. The one area of concern would have to be the right back position as Debuchy was really not on his game at all and all of Tottenham's good play seemed to come down his side. He was left exposed, however, by Joel Campbell, who although worked extremely hard last night seemed to do so while negating his duties in supporting Debuchy on the right hand side. On the basis of this and the Zagreb game last week, I don't think there is anyone who would replace Bellerin in the first team squad as of yet.

We all know Giroud didn't have the best of games and is certainly not having the best of times at the moment either, but instead of constantly slating him, we should be supporting him. He is still a very good striker. I was also quite happy with Ramseys performance as he was a lot more involved in the game in the centre than in comparison to his run of games on the wing, which you would expect. I think it's time to move him back centrally. Who the manager should then leave out is the problem then however, Cazorla? Ozil? Sanchez? I'm just glad i'm not paid 6 or £8 million (depending on which reports you believe) to make that decision...If it was £9 million however...

The draw for the next round was made after the match and leaves us with another away tie this time up at Sheffield Wednesday which will be played on the 27th of October. Win that match and we go through to the quarter finals, and I know this is not the most prestigious competition around, but I find it irritating when people say 'i'ts a competition I don't really care about'. I think is the wrong attitude entirely as I see it as another Arsenal match and competition to win. How would those fans feel if some of the players turned up on match day like that? I doubt they would be so forgiving.

Now all that leaves me with is the small matter of Flamini's two goals. That really is a sentence I never thought I would even think about, let alone type. How bad those Spurs fans must feel having their only chance at winning a trophy ruined by Mathieu Flamini of all people is truly enjoyable. It really was just one of those strange nights, but if Flamini continues to perform like that, you would have to say the manager has little choice but to make him a regular starter again. Looking at the Leicester game at the weekend, the last remaining unbeaten team in the League, and it would be harsh to drop the Frenchman for that as it stands. That decision will likely be decided on Francis Coquelin's availability, however.

That second Flamini goal will surely be the inspiration for some sort of overly romantic song from Bob Dylan/ Bruce Springsteen/ Van Morrison..

Right, have a good one so,