Chelsea Preview: The Romantic or the Pragmatist? 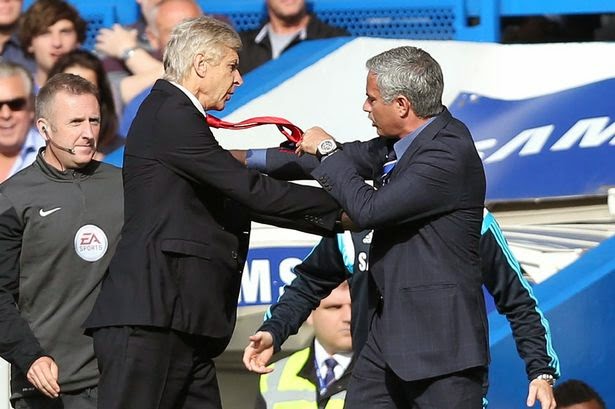 Hello everyone, so another weekend of Premier League football comes another big match for us. This time its the League leaders Chelsea led by a truly insufferable man. There have been a lot of people, myself included, inclined to agree with the general view that Chelsea are a team stumbling over the line rather than really finishing the campaign in true title winning fashion. That may so be the case in terms of performance, but it certainly is not the case when it comes to results; they have now won there last 4 league games in a row. Whatever people say about how they are playing ; they are getting the job done, isn't that so Mourinho? Isn't that so Chelsea? Isn't that so typical?

The main story the media and pundits alike are running for this game is the fact that Wenger has not beaten Mourinho in 13 attempts, however, it's also important to remember that Mourinho, rather Chelsea, have not won all those games, as some would have you believe. Mourinho's Chelsea have only won once in league encounters at Arsenal, the last being a 0-2 win at Highbury in the 2005/06 season. This is the 5th league match between the two managers at Arsenal so it's about time we got the win. I don't generally tend to pay much attention to the stats between managers, but rather the teams as a whole, as in this case; we have a very poor record against Chelsea in recent seasons, led by Mourinho or not.

Since the 2004/05 season, we have only recorded 4 wins in League encounters, just like the record we have against United that I wrote about before the cup match at Old Trafford; it is an abysmal record and it really is time to start putting it right. Remember when it used to be the other way around? Where Chelsea couldn't beat us? Good times. I wonder why the results in these matches have completely changed? Oh something about one team moving stadium at the same time the other team brought in a billionaire Russian to fund the club. I'm sure that is all coincidence however, and that Arsenal went through that bad period of results not only against Chelsea, but a lean period overall in terms of trophies won, due to the fact there were some considerable financial restrictions placed on the club, while the other could lavishly spend on what they want. I mean surely that couldn't could be used as any sort of reasoning for Arsenal's drop off the pace? Oh right...

Anyway this game is important for many different reasons, but not for the one reason we all hoped it would be for; this is not going to have any bearing on where the title will end up at the end of the season. Chelsea, although as horrible as it sounds, will be champions. The best we can do now is put a dent in their minds, make them work that bit harder for it and delay the inevitable. We have beaten United and City in Manchester while also thrashing Liverpool at the Emirates, if we can beat Chelsea then we will put that 'Arsenal can't do it in the big games' nonsense to bed once and for all.

I think we can win this match, we are on a great run of form (albeit the performances against both Reading and Burnley were not our most fluent), and as I said above, Chelsea really seem to be stumbling to the title at this point. One of the key reasons mentioned for this was due to the fact that Mourinho hardly changed his side around throughout the season, meaning that they would inevitably tire at some point. It looks like they have, and coupled with the loss of Costa (who Mourinho has labelled as 'having a small chance', and will make a late decision on him), they do not look like the same team that started the campaign. Appearances can be deceptive however, I just hope that the win against United last week, once again, completely against the run of play, has not given them that extra spring in their step for this match.

While Chelsea are stumbling somewhat, Arsenal have been excelling. We serve not only as the complete footballing counterpoint to Chelsea, but also in terms of how our respective seasons have panned out. We stuttered through the start of the campaign, struggling not only to get points but also to put in any sort of consecutive performances of a high standard, whereas Chelsea were a team that looked far more fresh than Arsenal; winning games at ease, they had players fit and the confidence and swagger with which they began the campaign serves to prove that point. It now seems as though the tables have turned somewhat, where Arsenal are looking like the fresh team, perhaps, rather ironically, aided by the lengthy injuries to key players such as Giroud and Ozil, who were able to come back into the team fit, relaxed and fresh at such a key period.

What is the difference in the two teams so? Why are Chelsea still 10 points ahead of Arsenal before this game? The last few weeks provide that answer; they are winning games when they are not playing well. That is what separates Arsenal from Chelsea, it is what they do better than anyone, they are the most ruthless team in the league, and as much as it pains me to say it, that is why they deserve to win the league. I do think we have greatly improved in this area however, and come next season we will be ready for a sustained assault on the title.

I think we all know what to expect in this match, A well organised Chelsea team looking to defend first and score second. We will have it all to do to break them down. On his weekly piece on Arseblog, Tim Stillman made an excellent point about the fact that Mourinho will look at Arsenal's weaknesses, which will in turn force Wenger to look inward at those weaknesses in an effort to fix them; something that makes him uncomfortable. He also made the interesting point about our habit of starting matches poorly in the second half, will he look to expose that? It will, I think, be an incredibly tight match and just like the game at Stamford Bridge in October, I think will be decided by the first goal. It is so important in these matches in particular. It will force Chelsea to open up more if Arsenal get it and will force Arsenal into a dangerous game of balancing defending and attacking with the risk of being torn apart should Chelsea get it.

I think there will be very minimal, if any changes to the team, here is the team I would go with;

Yes, I know this is the team that I put down almost every week, but I really like the balance. The only change I would possibly consider would be to bring in Welbeck; but the problem is, who to drop? I see a lot of people wanting that man to be Ramsey but I think we will be too open with Cazorla sitting back there against Chelsea; it has worked very well with Cazorla there, but a little cautious pragmatism added to that optimistic romanticism is the name of this game. Well, it's not really, but you get my point. I would also keep Debuchy in the team just ahead of Bellerin for that added experience and solidity. Let Debuchy do a job on Hazard, with Sanchez as added back up.


I would argue that Chelsea falter where Arsenal prosper and vice-versa. It seems that not only are the two managers, Arséne Wenger a football romantic, who thrives on fast attacking football, and José Mourinho, a football pragmatist, who prospers on direct, cautious football, destined to divide and serve as footballs own North and South Poles (except in this case, where opposites do not attract). So too are Arsenal and Chelsea football clubs; where Chelsea have almost solely relied on money pumped in from an outside benefactor, in comparison to Arsenal, who have strived to become the perfect self sufficient club; the result of which is a fantastic new stadium, the envy of every club in England (If not, why are Chelsea, Liverpool, Spurs etc. looking to upgrade?).

Almost everything about both Chelsea and Arsenal are different, the one thing they have in common, however, is that they both constantly show that there is more than one way to win a football match. It seems strange to talk about philosophical ideologies when it comes to a football match; as it really isn't a complicated game. This is simply the result of having two huge managerial personalities in the opposite dugout, and serves as a fascinating backdrop to a hugely anticipated game. Then again it could just be about me waffling on so as to fill out some sort of reasonable word count on the post. Who knows, who cares? I may be the writer, but you are the reader!

All this philosophical talk reminds me of one of my favourite Wengerisms;


'I believe the target of anything in life should be to do it so well that it becomes an art'.


Right that about does it. This is a really hard game to call, but the romantic in me says a 1-0 to the Arsenal. Let me know what your thoughts on the match in the comments, who should play, score prediction etc.

Until next time, have a good one.